On Saturday, August 24th, 51 ACE members attended Celebrate America at Six Flags America. This late-summer event gave members one last chance to experience the park before it transitioned into weekend-only operation. Members had the opportunity to bask in a nice August day, with clear skies and mild temperatures.

Check-in began early before morning ERT commenced. This year’s offerings were Firebird and Roar. Firebird has been running with its new trains for a few months, allowing them to break in and provide a smooth ride. With an hour of ERT, members could try out all six rows of the train or they could bounce on over to Roar, which was running two trains.

Once everyone got their fill, most members rushed over to Superman to get the coveted first ride of the day, or as many call it, the morning zen ride. There is something about cresting over that first drop while the public starts to dwindle into the park. Wonder Woman was also open at this point and many took the opportunity to get a zen, breezy ride on the starflyer. 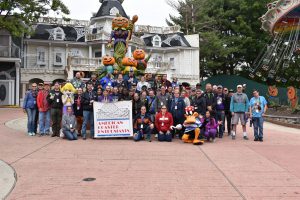 Once the park fully opened, members had the option to do what they wanted to before an informal lunch at the Chop Six patio just after noon. Members opted to use their dining passes: many went for pizza and chicken tenders, while others went for Macho Nacho, one of the newer options on the dining plan. Those entering the funnel cake competition later on in the afternoon chose to eat light, to save room for the challenge.

Park Q&A (watch it here) occurred in the middle of the afternoon, in the Grand Theatre. Rick Howarth, Park President; David Johnson, Director of Marketing and Communication; Denise Stokes, Communications Manager, and a bunch of other executive staff joined ACE to answer questions. Information about the upcoming FrightFest and Holiday in the Park were given, as was useful career advice about how to get involved in the amusement industry. Elizabeth Ringas, Regional Rep., facilitated a live auction of Six Flags memorabilia while also handing out door prizes to lucky members. Items for grab included pieces of Wild One wood.

Right after the Q&A, Six Flags America provided the opportunity for six members to participate in a funnel-cake-eating contest. The rules were simple: whoever ate the most funnel cake while not using their hands won. For many of the contestants, the first set of funnel cakes went down fine, while the second batch was much harder (literally). The whole thing was a lot of fun and allowed for some good laughs as members scoffed down hundreds of caloric goodness in about six minutes flat. The winner received four free tickets while the other five received two.

After the funnel-cake-eating contest, members were free to roam and get dinner with their dining pass, before an early evening showing of the stunt show, Battle in the Badlands. As the evening progressed and night fell on the park, members took more spins on their favorite rides while others watched the remaining shows at the park. Once the park closed, it was time for night ERT.

One of the highlights of Celebrate America is the ability to ride Superman in the dark with no lines. This fan favorite delivers a fantastic way to end a day of fun. Many members took the opportunity to marathon the coaster by sitting in their favorite seat(s), getting at least a dozen rides in before ERT ended. For those who preferred the inverted aspect of Joker’s Jinx, it was also open for ERT.

Thank you to the park staff and regional team for organizing this event. With a new pendulum ride coming next season, Celebrate America will only continue to get better with time.

August 25, 2019, dawned a beautiful late summer day, not too hot but not too cold. Twenty-two American Coaster Enthusiasts descended on Adventure Park USA in New Market, Maryland. Attendees hailed from Maryland, Virginia, Pennsylvania, and Washington, DC. Once in the park, event attendees rode the three coasters: Wild West Express, Wildcat, and the Tumbleweed.

An hour before lunch we waited in the picnic area to watch Al, Sam, and Luke ride the Sky Coaster.

However, sadly, it was down for scheduled maintenance. The group picture went off with a click before lunch. Then the American Catering Enthusiasts’ favorite time of day, lunch. Lunch consisted of hot dogs and hamburgers fresh off the grill, as well as mac & cheese, baked beans, watermelon, and chocolate chip cookies. The wind kicked up during lunch. Just as lunch was ending the wind took the last five pieces of watermelon right off the table and deposited them at Anne’s feet. Door prizes went to Silas, Danny, Melinda, and Becky.

Once lunch had ended Al, Sam, and Luke got their time to fly on the Sky Coaster as everyone watched.

Eric found the group at the pavilion and proceeded to guide us out of the backstage gate. Eric explained his new Fall Festival attraction coming on September 22 – October 21. He will have a four-acre pumpkin patch with hay ride, 150-foot-long zip lines (the longest in Maryland), bounce pillow, horse racing, pumpkin bowling, and Indian Village. Many of the enthusiasts showed excitement for this coming attraction. 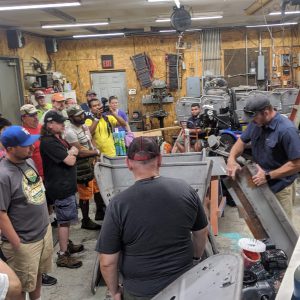 Eric proceeded to take us over to the Wild West Express, where he invited each of us a chance to walk to the top of the 53-foot lift hill. After our lift hill walk, we were shuffled off into Eric’s new shop. He showed us his latest projects. A 12-bucket Ferris wheel is getting refurbished in the shop and will get a new life at Adventure Park. He plans to have it up in time for the fall festival. The kiddy pedal cars for the festival were also in the shop. Eric added that there will be adult pedal cars as well; however, they hadn’t arrived yet. The tour ended with just enough time to play Laser Tag to get our game on.

After the fantastic event at Adventure Park and the big Laser Tag game, the group broke up. Some headed home and some went back into the park to keep on riding!

Coasting for Kids returned to the Mid-Atlantic for a special National Roller Coaster Day edition! Coasting for Kids is a special celebration to thank all those who committed to fundraising at least $100 for the Give Kids the World Village. Six Flags America generously hosted all those who achieved the goal last Friday. Every attendee enjoyed first ride access on Firebird, newly remodeled for this year with floorless trains. They also enjoyed admission to the park, exit passes, a meal voucher, and Coasting for Kids swag.

Sean Gross, Director of Development at Give Kids the World, was able to attend this event and share the day with all the earners. 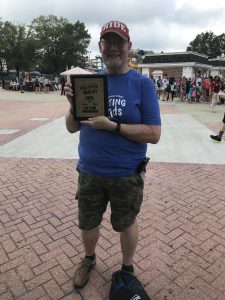 Congratulations to the ACE Cares team for being the #1 fundraising team!

The event raised over $3600 to support the cost to run the Give Kids the World village, which is more than half the cost to send a family to the village for a week.

Thank you to all who donated to support this amazing charity! Did you know that you can also give your time to the village? The next time that you are in Kissimmee, Florida, give a few hours to help make these vacations for families of critically ill children extra special. Check out some of the jobs you can do there like drive the train and scoop ice cream!

A Quick Look at Coaster Con 42 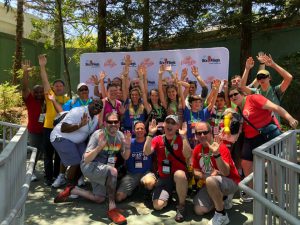 The welcome dinner at Six Flags Magic Mountain started the Con off on the right foot. I enjoyed the music and watching ACErs get their boogie on. My father also won the raffle to go up the lift hill of Goliath. However, he is afraid of heights. I took his place in the 235-foot climb even though I also have a fear of heights. I have never climbed a lift hill before and it’s an experience I will never forget. It was incredible and I hope every ACEr can experience it as well. Six Flags Magic Mountain also had good ERT opportunities. The ERT allowed my family and me not to stress about getting coasters in. By the end of the second morning I had gotten to ride all seventeen operating coasters.

Other events at Six Flags Magic Mountain included the ACE annual business meeting, the photo contest, the video contest, Midway Olympics, the fourth annual Rubber Ducky Regatta, and backstage tours. The annual business meeting inspired me to be more active in the club. It was very informative, and it made me realize that most of ACE is run by very few but hard-working people. The photo contest this year was filled with such talent it made it difficult to vote for only three. I liked how the video contest had two categories this year, and its coordinator, Jordan May, is a very talented presenter. I think it’s safe to say we will all be looking forward to his involvement with ACE in the future. Midway Olympics and the Rubber Ducky Regatta were as competitive as ever. It was nice to see how much the ACErs were getting into it. The backstage tour was informative and fun. Six Flags Magic Mountain was packed with fun and excitement, but the fun didn’t stop there. 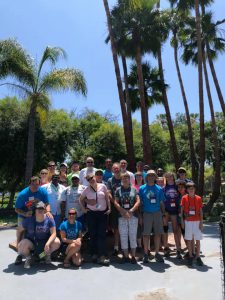 The ACE annual banquet is always well done, but this year was especially good. Every presentation was interesting and thoughtful. The banquet moved along smoothly and the food was good. Jerry Willard, ACE’s immediate past president, received both a member recognition and the “Spirit of ACE” award. It was a touching moment. It was so meaningful to see someone who has given so much to ACE be recognized in such a significant way. Coaster Con 42 ended on a good note. It was good to see both new and old faces. I was pleasantly surprised by how many younger ACE members were in attendance. I have high hopes that Coaster Con 43 will be just as good! 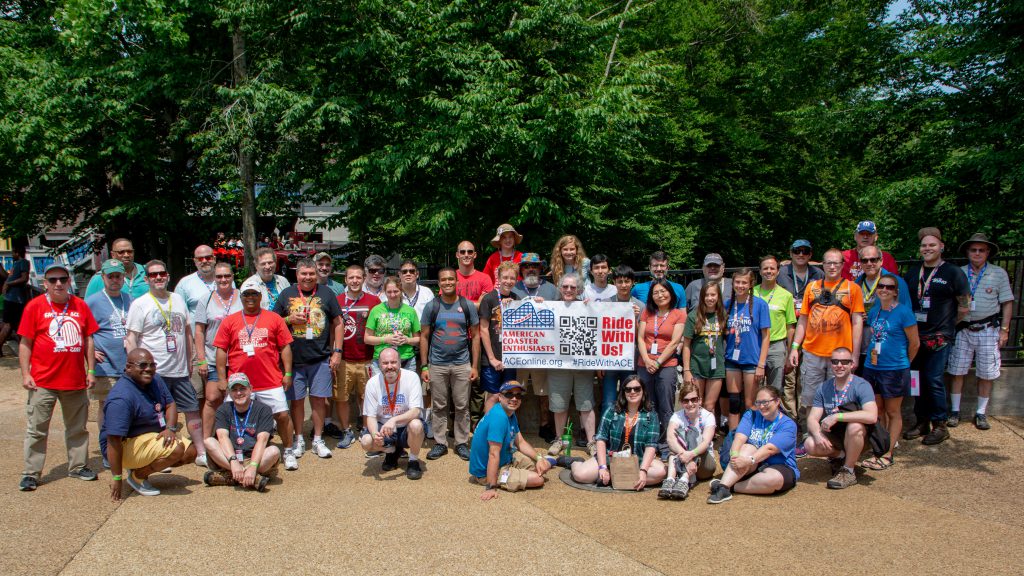 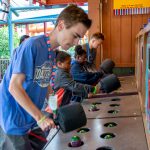 I had an amazing day at this event. There were so many different people in attendance and so many things to do. This was one of the best days I have ever had, because everyone treated me so well. I am not an ACE member so I just went as a guest, but everyone treated me equal to everyone else. I believe the highlight of the day was the picnic in the Black Forest picnic area. There was a buffet with amazing food, and the door prizes included some stuff I would’ve done anything to have. I won a copy of the 40th anniversary documentary for the park. The highlight of the picnic was hearing Kevin Lembke, Busch Gardens park president, speak on different ideas the park has had and where the ideas come from. 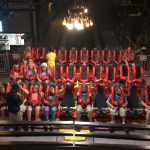 The day included tons of different ITOTs (informal takeover times) on all 7 roller coasters, a Whack-A-Hun Tournament, and Griffon and Apollo’s Chariot ERT before and after the park was open. This event was something that I’m never going to forget and has made me realize just how amazing it would be to be an ACE member. Every person that I met was incredibly nice to me and is the kind of person I strive to be.

All I want to say is that I had an absolute blast at ACE Dives and I will come back every year.

ACE Dives is an annual event held by the Mid-Atlantic region, which welcomed 92 attendees from 8 states and DC this year.  We were honored that our members invited 14 guests to share in the fun of our event.  We hope that they will consider becoming ACE members themselves and that we will see them all back next year as members. 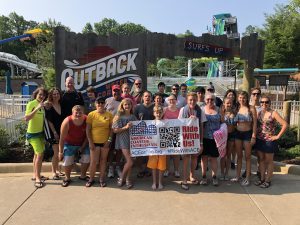