Coasters of China – Part 3: Window of the World 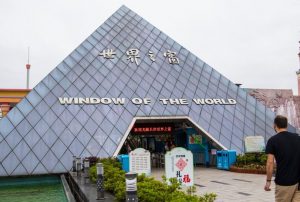 Window of the World is described by locals as the “old” park; in fact, the faculty member who drove me there told me it was probably “50 years old.” However, the park opened in 1997 so while it is certainly older than a lot of parks in China, it is still pretty new by American standards.  Window of the World is themed to famous world landmarks. They generally are not integrated into the rides themselves, but instead are separate photo opportunities scattered around the park. Window of the World is located directly off of a major freeway that travels through Changsha, so if you are in the city you may very well see the park from the road. The other parks in the Changsha area are either outside the city or not visible from the road (featuring small rides).

We visited during the week and the park was virtually deserted. In general that is a good thing, but as some Chinese parks do, Window of the World has operators wait until trains are at least partially full until dispatching. Therefore, a coaster might look like a walk on but you still might be waiting a really long time for the actual dispatch. We waited longer for the coasters than for the flats, which seemed more popular with the locals (this might change when their new coaster opens sometime next year). This also makes it pretty impossible to marathon any of the rides in the park because you need to wait for other guests to show up. 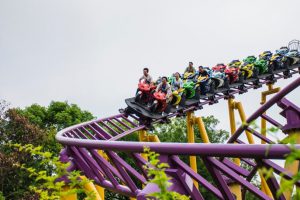 The first coaster I rode here was a Zamperla Motocoaster called Speed Shuttle. This is actually quite a bit of fun, and was the coaster that I enjoyed most at this park. It is not terribly tall or fast, but anything going much taller or faster wouldn’t be very comfortable in these restraints anyway.

The park has a knockoff Gerstlauer Sky Roller, and though I went on it several times I do not believe it is possible to completely roll the seats over. Despite this, it’s a fun little ride that you shouldn’t miss, not least of all because the Chinese riders seem to try to keep their seats as steady as possible while foreign riders attempt to get the seats to tip as much as possible. The contrast is quite funny. (You will see this on teacup rides as well—Chinese guests tend to not spin them while foreign guests will.)

The spinning coaster was closed the day that I visited. I don’t honestly know if it would open later in the day or not (the map did not make this clear, nor were there signs; the cars were covered though, so we assumed that it would at least be awhile before it opened). Therefore, we went to ride the second coaster that was opened, the SLC knockoff called “Suspended Coaster.” 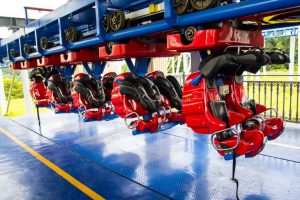 This one is manufactured by Beijing Jiuhua Amusement Rides manufacturing. I much prefer Golden Horse rides to these. Although the Beijing model had incredibly padded restraints, there will be major issues for most Americans who attempt to ride this particular coaster. When we tried to board we were immediately stopped by a ride operator who would not allow us to choose the front seat despite being the only people in line. She then pointed to me, said “fat” (along with a gesture and puffed up cheeks), looked to the student I was visiting with, said “tall,” and made us ride in the very back. He is a little over six feet tall and I wear a women’s size 12, for reference.

The seats (other than the back) all had booster seats installed so that the restraints would fit even tighter on average (very small) Chinese guests.

Despite fitting, this was incredibly uncomfortable. The padded restraints do help with the head shaking that is normally a problem on an SLC, but the bones in my hips were wider than the hard plastic seats (a problem that weight loss would not fix), so I was actually perched up on their edges. We had to wait a long time for the train to dispatch, and these plastic sides dug into my hip, butt, and leg bones throughout the ride. This is the only Chinese roller coaster that I have been on that I would never ride again. I had similar issues with the size of the seats on flats that were manufactured by the Beijing Jiuhua company as well (I always fit but it was not comfortable), so I would not recommend these rides for anyone my size or larger. Of course, you can always try if you want the credits, but I am not sure that some of these rides are worth the effort or potential embarrassment. 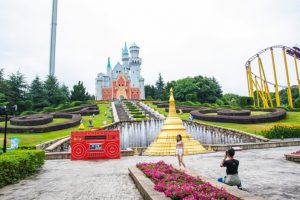 The park is in the process of building an S&S coaster. It was supposed to open this year, but was still sitting in a field with camouflage over it when I visited. Fortunately, since that time it has started being constructed and may open next year. It will be a very good addition for this park and should bring back a lot of business to it.

The theming here is not as good as at the newer parks, however, the park makes up for it with beautiful tree cover throughout. During the summer it is incredibly hot in Changsha, so having shade to walk under is fantastic. Although Chinese amusement parks don’t have many souvenirs in general, this one mostly sold some small toys (including some great My Little Pony knockoffs called “Little Horse”). The park does have some statues that are meant to be Disney-esque, as well as a castle.

The rides here all have cubbies for cameras and bags, and people use them (including with expensive items). Since only one train’s worth of guests will be allowed in the station, this is generally safe.

There are some excellent restaurants outside of the park (within walking distance), and it is easy to get a taxi out front as well. Have your destination written in Chinese and you should not have any trouble getting to or from Window of the World even though it is not yet on the subway system.

Up next: Shanghai Disneyland