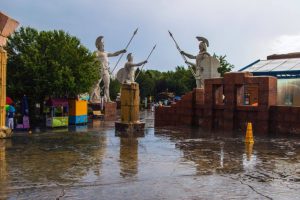 Happy Valley Beijing is available on the Beijing subway system. This makes it very easy to get to (it has its own stop, which has some fantastic art related to the park). The B&M flyer here might be a clone of Superman, but it goes around and through a mountain and feels completely different. Like Fantawild, Happy Valley is very well themed, but is more based in thrills and has a lot more coasters. Happy Valley is slightly more expensive than Fantawild (though this might be because it is in a bigger city), but offers a late-afternoon discount. Be aware, however, that many rides will close at 4 p.m., so do not think that it is possible to ride all the coasters on the afternoon ticket. It is cheaper because some rides will be shut down.

On the day we visited, it was thunderstorming when we arrived, but after a quick discussion with the gate agent (she really wanted me to understand that no rides would be open till the thunderstorm stopped), we went anyway. I was immediately struck by theming, again. Chinese companies invest a lot in these parks. They all feel very new and very well developed. 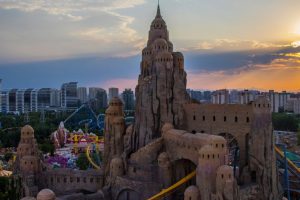 The rain stopped, there was a rainbow, and some of the rides reopened (only briefly, though, as some would be closing soon). I was surprised to find out that some of the indoor rides would not be open later even though everything outside was closed, so the ride opening and closing times here are much more strict than at Fantawild. (I was especially sad that the Air Race, one of my favorite flat rides, was closed despite being inside during the storm.) At Happy Valley, there are opening and closing times for all major rides on their website, and you should assume they will be followed. To ride everything, you should at least plan on spending the morning and early afternoon at the park. You won’t be able to visit in the late afternoon and ride everything, though you will be able to wander around, take photos, and experience the park.

The centerpiece of Happy Valley is Crystal Wings, a Superman clone that circles a mountain-side city. The coaster feels completely different thanks to the theming, and there are many good things to be said about how the park has themed and maintained all of their rides.

The park also has Extreme Rusher, an S&S launched coaster, which is in a section of the park themed to cars and speed. This had closed by the time the storm was over, so I can’t speak personally to how it rides. To get this credit it is best to go in the morning or early afternoon. 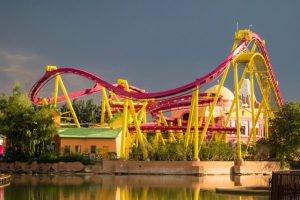 The Family Inverted Coaster is also a B&M, and it is one of only two family inverted coasters by them in the world (both in China). This is an excellent little ride, and I was initially more excited to ride it than Crystal Wings.

The park has two Vekomas. One is fairly standard SLC, but given that SLC-looking coasters are often knock-offs in China, I appreciate that they installed the real thing. It is also called Golden Wings in Snowfield, which is a beautiful name that reflects that it is painted white. The ride goes through some fairly thick trees, which also helps with the experience.

Their second Vekoma is a mine-train model called Jungle Racing (it is not a racing coaster, however). It also goes through the woods. I was almost crazily excited by this ride because you can ride in what is normally the “zero car” in mine train coasters actually shaped like a train. Regrettably, the pillars that hold up the roof on the train engine are metal and not padded and adult-sized humans will knock their elbows and head into them while riding. On Jungle Racing we were allowed to ride with our backpacks and other bags, which seemed strange, but we were not allowed to leave them on the platform. Other rides had cubbies or allowed bags to be left on the platform. 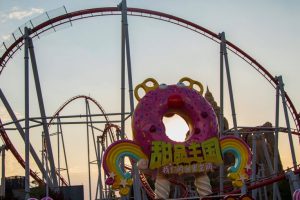 Like Fantawild, Happy Valley seemed to only let one train’s worth of guests into the station at once (though, given the low crowds, no rides were running two trains). As such, safety of personal items was not really a concern. (I have gotten comfortable leaving my DSLR places in China that I definitely would not in the US, but only in parks that are fairly empty with high security.)

I visited the park in 2018, and so the B&M hyper was currently under construction when we were there. One of the big differences between Chinese and American parks is how easy it is to walk into construction sites by accident, so if there is construction going on at a park be careful. (We walked onto the site for Flight of the Himalayan Eagle Music Roller Coaster completely by accident while looking for a path around to the front of the park that no longer existed. We quickly backed up and went around the long way.) Be careful. China expects its citizens to take care of themselves in these circumstances. In any case, this ride is now complete, stands 157.5 feet tall, and has a splash effect. 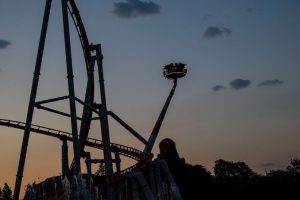 Happy Valley has a lot of flat rides that are well maintained and worth a ride, but be sure to not miss their Intamin Flying Island that is called Energy Collector. This platform is raised on an arm. You stand around on the platform without restraints, so when it changes direction or begins to go up and down it can actually be a little scary. It also provides fantastic views of the entire park. They are a rare enough ride that it shouldn’t be missed.

Happy Valley is accessible directly off of Line 7 from the Beijing subway and has its own stop, the Happy Valley Scenic Area station, which is right outside the front gate.

Up next: Window of the World