For the past three summers of work as an associate professor of English at Frostburg State University, I have spent a month in Changsha, the capital of the Hunan province in the People’s Republic of China. When my department chair first asked me if I would be interested in this trip, I checked RCDB (the Roller Coaster DataBase) and found out that there were parks in the area, so I partially agreed based upon the fact that Changsha had multiple parks to visit, and I was assured that travel within the country was relatively easy. What follows is not just information about each park I’ve been to, but also general travel tips for China and ideas about how to get the most out of visiting amusement parks there.

Fantawild is located outside of Changsha, reachable by taxi or Didi (China’s Uber service). Fantawild is one of the large park operators in China and is currently expanding. This location now has three parks, with their Oriental Heritage park opening shortly after I left this past summer. Fantawild is a theme park complex with incredible theming. One of the things I noticed in Chinese parks is just how largeeverything is. Perspective is used much less often to make buildings look larger than in parks in the US.

Because the Hunan province gets very hot during the summer, the two parks I visited had many indoor attractions, including multiple 4D attractions and dark rides on par with Universal’s rides.  When I visited, a ticket  that got us admission to both parks was about $30 USD. It was a very hot day, so the parks were fairly empty despite it being a holiday weekend (the Dragon Boat Festival). Locals will tell you that you have to spend several days to experience everything at Fantawild. However, we were able to ride the coasters and several other rides in half an afternoon with little trouble. If I go back I will want to spend more time there because I missed some of the dark rides and we did not see any shows, but it was over 100 degrees F, so I did not experience lines or waits and was able to see all the rides within the time frame we had. 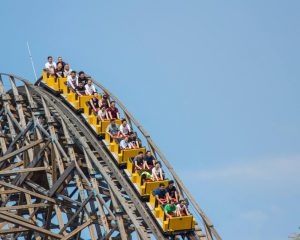 This Fantawild location has a lot of coasters that are by familiar manufacturers. My favorite is Jungle Trailblazer, a Gravity Group woodie that is incredibly twisty. Built in 2016, this is not the tallest or flashiest ride at the park, but it is incredibly smooth and is the only woodie I have had the pleasure to ride in China. Since most Chinese parks are relatively new, they don’t have many older rides like woodies from decades past. However, they are building smaller woodies that provide great laterals and airtime to fill this gap in many of their parks.

The other coaster in Dreamland is a Vekoma boomerang with the hilarious name Stress Express. This is a newer boomerang, also built with the park in 2016, and offers a fairly smooth ride, especially for the model. 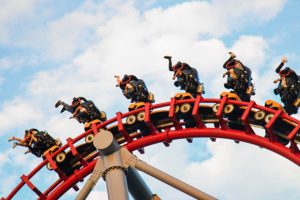 I can’t overstate how beautiful these parks are. Every area feels incredibly well done, and I look forward to visiting the Oriental Heritage park this next summer. The new park not only promises a new Vekoma coaster, but also rides that share a lot of information about the history of the local area. Changsha is the birthplace of Chairman Mao (be sure to visit Orange Island near downtown to see a statue as well as some beautiful gardens) and also the location of the Hunan Provincial Museum where you can view Lady Dai, a world-famous mummy. Fantawild’s newest park in Changsha celebrates this heritage and hopes to educate foreigners and locals alike about this history. 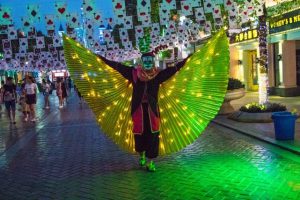 Operations notes: Fantawild only allowed one train’s worth of people (or two rafts on their shoot-the-chutes ride) in the station at a time. Cubbies are in use to protect your belongings. On days with one train operations, this means that valuables such as phones can be left in the station in a backpack with few worries (the Chinese students I traveled with acted like I was a little crazy for worrying at all).

Outdoor queues at Fantawild have seating and lots of mist machines. The seating is especially nice, though unlikely to appear in the US.

Fantawild sometimes closes early (6 pm the day I visited), so be sure to double check an operating calendar before visiting. Sometimes rides will close off their queues early before closing, but if they get cleared out before closing they will reopen them and let some more people in.

Up next: Happy Valley Beijing