We had an opportunity to experience one of this year’s new coasters this past September. We decided to attend Rollercoasters Eh! – the annual event at Canada’s Wonderland, which was held by the ACE Canada region. We flew to Buffalo, New York, via Baltimore. Once we arrived in Buffalo, we got our rental car and drove across the border into Canada. We got settled into our hotel, then we ventured into Toronto. We visited the Hockey Hall of Fame and the CN Tower. 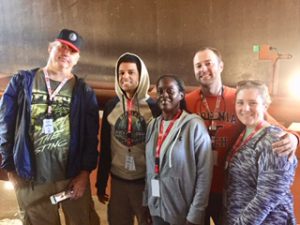 Saturday morning, we got up and got ourselves ready to go to Canada’s Wonderland for the event. 180 people from the USA and Canada were in attendance. Once we arrived, they had a small breakfast consisting of donuts and coffee from Tim Hortons (it’s the Canadian version of Dunkin Donuts). After that, we were divided into small groups for the tour, which took place at their newest attraction, Yukon Striker (a B&M dive coaster). They took us inside the tunnel and underneath the station. It was very interesting. The ERT session for the morning consisted of Behemoth and Backlot Stunt Coaster for an hour. Once 10:00 rolled around, the park opened to the general public, and we got the first rides of the day on Yukon Striker. After that, we went to the International Marketplace Restaurant, where they gave us another breakfast, buffet style. Then it was free time to explore the park.

Around 2:00, it was time for lunch, which was also held at the International Marketplace Restaurant. During lunch, each attendee got a Yukon Striker bag with a sports bottle inside. An hour later, it was time for a Q&A session with the management. One of the many things that they told us is that they’re getting WinterFest this year, but no, coasters won’t be operating. At 8:00, it was closing time, so we had ERT on Vortex (an Arrow suspended), Wonder Mountain’s Guardian, Leviathan, and to end the night, Yukon Striker. Overall, it was a great weekend.